While it is possible to allocate users to branches, all Claimant Representative profiles allow the users to view and process claims regardless of branch.

Please note that the visibility of claims in the Worklist and the Search also depends on the status of the claim and if it is allocated to somebody else.

The CR Administrator can log in to the administration console and manage all users (RTA and/or EL/PL) belonging to their organisation. They can:

They can also see their organisation’s branch structure.

The CR RTA Claim Handler can work with all RTA claims.

The CR RTA Team Leader has the same functionalities as a CR RTA Claim handler. Also, the following functionality is available:

Whilst their primary view is restricted to RTA claims only, the “Login as another User” function permits log in as an EL/PL handler, thus giving access to EL/PL claims.

The ADVANCED USER Delete Claims profile allows the user to delete claims, in line with GDPR. The use of this function is being monitored.

This profile allows access to the Archive function, where claims reaching the end of Stage 2 (Court proceedings) can be viewed for 12 months after completion.

A single user ID can be assigned multiple profiles, instead of requiring separate User IDs. If you would like to extend access to the Administrative console to existing Users, add the Administrator profile to a Claims User ID, rather than adding claims profiles to an Administrator User ID. Making this change ensures visibility, and access to claims is not lost. 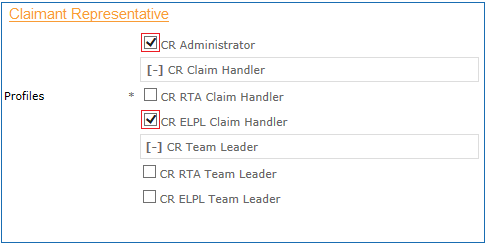 Back to the top.

These are cookies which are necessary for the site to function.

Google Analytics is a web analytics service offered by Google that tracks and reports website traffic so we can improve this site.